Line-up changes and hunt for a new deal

As many of you might know already, Excalion is getting back to business after a longer period of silence. We can safely say that a lot has happened since last two years. New singer and new guitarist but it doesn't stop there. Our long-time bassist and dear friend Tero moved to Barcelona and continues in the band only to write further lyrics that have always been his special gift. And.... yes, there is more.... we are in the hunt for a new record deal as the old deal with Limb music ended.

So here we go. We have just finished recordings and mixing for the new promo that we start distributing to record labels. We are hugely excited. Check out some early clips from this following youtube-video, but believe us when we say, the songs and the new line-up are amazing!


Here's a short message from Tero Vaaja:
"For the friends of Excalion,

Since some time, I have not been playing bass for Excalion. In December 2015 I went to live in Barcelona, and I am not around the Excalion base camp anymore -- which made it necessary to put an end to one chapter that started more than 15 years ago. I handed over the Excalion bass duties to a great player and a good friend, and I am not in the band's lineup nowadays. But, fortunately, the chapter is not really ending. I have written lyrics for a number of new Excalion songs, and I will continue writing lyrics whenever the band wishes so. I understand the guys are happy to have me around as a kind of a sixth member, and I am more than happy about that!

There is a time for everything, and in my opinion, now it is time for Excalion to be better than it has ever been. The band we founded in an attic so many years ago has matured into something fantastic. That is just so cool. -Tero"

As mentioned by Tero, we didn't have to look far for the new bass player. Our good friend and hugely gifted bassist Onni Hirvonen took the role in the band with ease. Here's a short message from him:

I was at the same time extremely honoured, excited, and scared when my old friends from Excalion asked me to continue Tero's work on bass. I can never compete with his massive lion's mane of hair but I hope to bring energy to the stage and do justice to the songs, old and new. (And oh boy, the new ones are something that you should look forward too.) I wish all the best for Tero in his new adventures.
Rock on! -Onni"

To conclude, we are playing some gigs still this year and look forward sharing the new material with you as soon as possible! 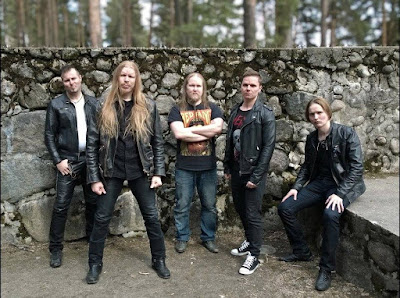